Forecasting in the electrical grid

A. Uncertainty in the electrical grid

In today’s electrical grid, as the integration of renewable energy sources (RES) in the grid increases, the uncertainty in the available generation also rises. In particular, the larger the share of RES in the grid, the more dependent is the electricity generation on weather conditions, and in turn, the more unpredictable electricity generation becomes. This uncertainty also affects the demand side as electricity consumption is also weather-dependent and every unit of produced energy  must be consumed somewhere.

B. What do we need to forecast?

Traditionally, most of the forecasting research that has been performed in the context of the electric grid has focused on four key variables: electricity demand [1,2], electricity prices [3,4,5], wind-based generation [6,7], and solar-based generation [8,9]. While there might be other important variables influencing the electrical grid, these four quantities are arguably the most important for utility companies and the transmission system operator.

In recent years, together with the increasing integration of RES, the volatility of electricity prices has also surged. In this context, accurate forecasting of electricity prices is of paramount importance to utility companies for successfully trading electricity, scheduling and planning processes, and programming backups. 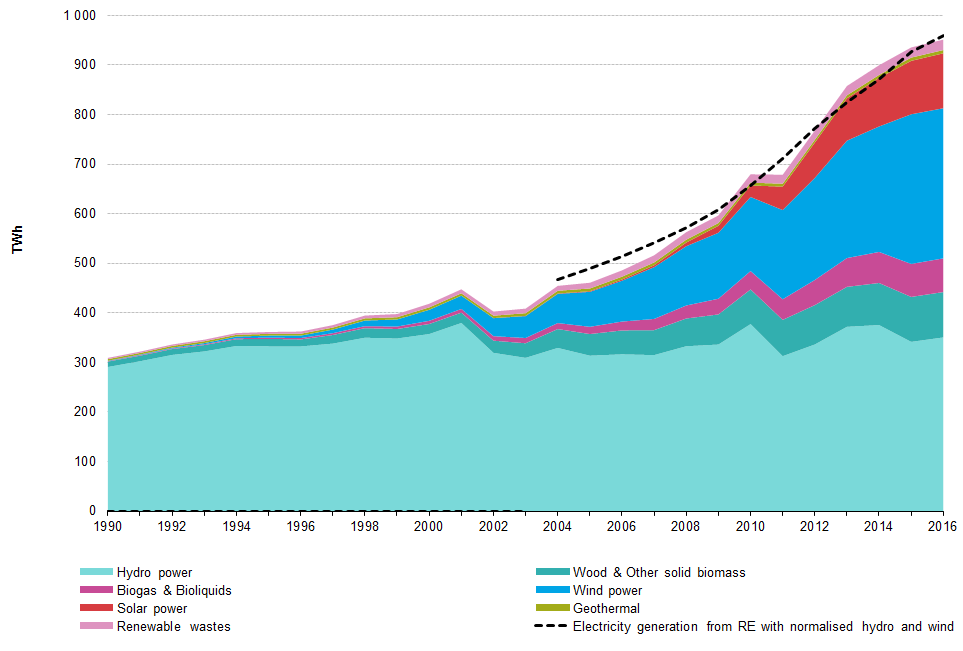 Gross electricity generation from renewable sources in the EU-28 [10]

As a result, accurate forecasting of wind and solar generation is crucial for both utility companies and the transmission system operator: as before, the transmission system operator needs to forecast the wind and solar generation in order to purchase reserves, anticipate possible congestions, scheduling power systems, etc. Likewise, for utility companies, these forecasts are essential in order to perform power trading and process planning.

One of the distinctions that is typically made in terms of forecasting methods regards the prediction horizon. Usually, a distinction is made between forecasts that are made for short-term horizons and forecasts which employ long-term horizons. While this separation can be observed across the different forecasting fields, the meaning of short-term vs long-term does not have a standardized meaning.

By contrast, when referring to solar generation, the division between short and long term forecast is made based on the family of models used. Short-term forecasting is characterized by prediction horizons below 6 hours and by forecasting techniques based either on time series models using ground data or on cloud vector models using satellite images. When the prediction horizon is larger than 6 hours, the described techniques are no longer accurate, and in this new time frame, numerical weather based models are required. In particular, numerical weather based models are employed to forecast solar radiance ranging from 6 hours to 1-2 weeks ahead.

Another distinction that is usually made is between point and probability forecasts, i.e. between forecasting an expected value or forecasting the probability distribution of the variable of interest.

An example of a point forecast model and its estimation is given as follow: let’s define the variable of interest by

, a forecast model of

as the model exogenous inputs, and

the model parameters. Then, given a set of observed measurements

, a technique typically used to estimate the model is to minimizing the sum of squares of the observational errors, i.e.:

This estimation has a particular statistical interpretation: assuming that the observations

, and that the measurement errors

are independent and follow a zero-mean Gaussian distribution, minimizing the above optimization problem is equivalent to maximizing the likelihood of the observed errors.

We can use a a real life point forecast example to further illustrate the concept. Given the historical demand in a country, we need to make the hourly day-ahead forecast of the electricity demand during the 9th of February. In this case, the exogenous inputs could be the demand over the previous days, and the model could be a simple linear models, i.e.

. Then, after estimating the parameter

A first method to build probability forecasts is based on estimating the parameterization of the probability density function (PDF) of the variable of interest. In particular, defining again by

the variable of interest, by

the parameterization of the PDF, and by

. The main drawback of this method is that it requires to make an assumption on the type of PDF that describes

Given a random variable

is defined as the value at which the probability of

is less than or equal to

. In other words, defining the cumulative distribution function (CDF) of

is equivalent to the value

Using the above definition, the second methodology is based on estimating a series of quantile functions

of the variable of interest

probability distributions and assume that they are independent.

In the context of electricity, the variables of interest are time series data; therefore, the assumption of having independent probability distributions does not necessarily hold. To address this issue, scenario generation builds a representation of the interdependencies between the time points. In particular, it first models the correlation of the variable of interest at the different time horizons, and then it generates a series of statistical scenarios (also known as traces) that takes into account this interdependence.

In the case of scenario generation, the body of literature is even much more shorter than that of probability forecasting. One of the first and most successful methods to build statistical scenarios is [7], where the statistical scenarios are generated based on the transformation of random variables into a single multivariate Gaussian variable, and where the short-term forecasting of the wind power is used as a case study.

As before, we can use the example of the day-ahead electricity demand forecasting to represent this method. In this case, as shown in the plot below, scenario generation produces a series of traces representing possible instantiations of the variable of interest on the day-ahead.

The body of work of forecasting in the context of electricity and the electrical grid is very wide. In this short blog post we did not intend to cover the specifics in too much detail, but simply provide an overview of the different concepts related to forecasting. If the reader is interested on the details of forecasting models, model estimation, or forecast evaluation, the references provided in this post are a very good starting point.